I guess the next couple of weeks are going to be quite focused on one and only that one thing. At least when today is some kind of foretaste for it. I bought Pokémon Diamond today and since 2pm playing this was more or less all that I’ve been doing.

Actually at first I had also planned to do some integration work and some further messing around with hg and bzr, but this game just managed to suck up all my free afternoon. Not that it should have come as a surprise to me. After all, I already had (or have somewhere) the blue edition for the original GameBoy and also one of the games that was released for the GBA with at least the blue edition having exactly the same effect on me.

At least not all my day was spent hunting down small strange-looking animals and stuffing them into airtight balls, though, but I also took some time to ride my bike … well, I had to get the game first somehow, hadn’t I? ;-) But after returning from my ride to the local store (and to the McD in its vicinity since the store got the delivery later than anticipated and nearly getting fried by the sun …) I finally could start playing the new … old … well, the first real Pokémon on the DS :D 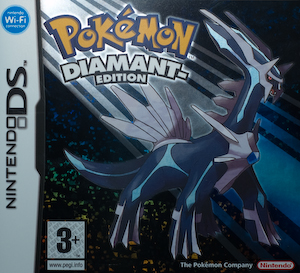 And so far the game has been just what I had been expecting. It’s mostly the same as any other PM-adventure game but it includes more or less the best part of all it’s predecessors like day and night cycles (using the DS' internal clock) but in some areas in my opinion the game should have been improved more. For example: During most of the game when you’re outside of battles and exploring the country, there is no touch control. Sure, the controls of games like Animal Crossing: Wild World were not perfect, but at least the option to use this control scheme would have been nice.

But it’s still just great to hunt those those tiny critters … ;)