… long story short? OK, downloaded Firefox 3 Beta 4 last night before going to bed, started using it today to see if I can finally really use it (I had some problems with it before - I guess Beta 1 or earlier). And well, as I wrote later today on Twitter:

Hm…. so far I see absolutely no reason to switch back from Firefox3 beta to Firefox2. Great :D

The great thing about FF3 is, that I’ve been using it now all day without restarting it even once due to slowdowns. And yes, I’ve head enough tabs open for FF2 to start feeling sluggish on my Macbook ;-) Seems that at least the big memory leaks are gone now.

Another improvement comes from Firebug 1.1 being directly downloadable from getfirebug.org and available for FF3. I simply can’t live without Firebug. Same goes for Adblock Plus which also so far works without a problem in FF3 Beta 4.

There is also a simple way to get around the compatibility check for extensions which might come in handy if you see an extension that claims to be compatible for instance with Beta 3, yet hasn’t been bumped to Beta 4 and you’ve heard from other people that it works.

Another of my problems with FF2 was the download manager. For some reason, the whole download process was always painfully slow with the browser basically freezing until the download had passed the first 50%. That was also one of the reasons why I always try to get any browser in one way or another interact with commandline utils like wget or cURL. Now with this problem also resolved, I guess I will use them way less than before in close combination with a browser (although downloading big files is still more handy with them since at least with wget it’s not really a problem to use Firefox’s cookies and it’s nice to have to option for instance to lower the allocated bandwidth for a download ;-)). 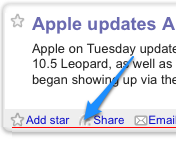 One weird thing I noticed, though, was that in Google Reader I often see some strange red lines, that - based on their position - are probably not part of any CSS statement going wrong.

That said, it has been really a great experience so far and I hope that the final version will soon (or at least more extensions being made available for the FF3 pre-releases ;-)).