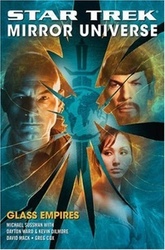 If you remember how the TOS episode “Mirror, Mirror” ended it had introduced a whole new universe to the world of Star Trek: The mirror universe, where everyone was more or less the evil counterpart of the universe Star Trek fans were used to. When 30 years later the Deep Space Nine episode Crossover continued the plot, it just gave small hints of what happened in between and between the Enterprise double-episode In a Mirror, Darkly and “Mirror, Mirror”. And this is exactly where the two “Mirror Universe” books, Glass Empires [OL] and Obsidian Alliances come in.

The first one – Glass Empires – contains 3 stories with the first one taking place right after Hoshi declared herself the new Empress of the Terran Empire at the end of In a Mirror, Darkly (pt2). The second one continues the events of “Mirror, Mirror” and explains what kind of influence Spock had on the Terran Empire after meeting James T. Kirk from the other universe – as was hinted in DS9’s “Crossover”-epsidoe. In the 3rd story the reader meets Jean-Luc Picard in the mirror universe who raids tombs for Gul Madred who once held Picard prisoner in “our” universe.

All the stories are great, yet the first two seem more relevant to the whole timeline of this universe – at least from what I can tell without having read the 2nd book. While one could assume that all of them would only live from the tons of familiar yet here strange faces, this is in my opinion not the case. “Age of the Empress” (by Dayton Ward and Kevin Dilmore with the story by Mike Sussman), “The Sorrows of Empire” (by David Mack) and “The worst of both worlds” (by Greg Cox), all have completely original and interesting stories to tell with the 2nd one being my personal highlight. Some parts of this one are very similar to some of the books by Isaac Asimov; probably not on the same level – I’m not a professional so I wouldn’t know – but there are definitely some similarities. I won’t say more here, however, in order not to spoil anything ;-)

The 3rd story is for me a little bit like a black sheep. Still cute, but it simply doesn’t seem to fit in. First of all, it is by far the shortest of the 3 stories and also doesn’t really have all that much content. In length it felt very comparable to a single Corps of Engineers short-story which was for me a let-down after the first 2 really lengthy parts. But the bigger problem for me here was, that other than taking place in the same universe it had next to relations with the previous two stories. Sure, it shows how Terrans are treated after the end of the Empire, but the rest of the plot seems to be completely standalone.

While skimming through Memory-Beta, I came across the book Dark Mirror from 1994 which takes place in the 24th century. I didn’t read this one, but it seems mostly having been ignore during the development of the plot for the mirror universe for both, canon and non-canon. The whole storyline around the mirror universe when you consider the books written between 1994 and 2000 seems to be quite a mess and perhaps this 2-books-series tries to clean it up. And even if not, I guess it’s a valid assumption, that “Dark Mirror” and the Mirror Universe Trilogy take place in their own universes … This would at least make tons of timeline-conflicts between all these books and canon-content irrelevant.

Over the years I've written quite a few reviews 🙂 You can find them at /reviews/.