About 3 weeks ago I wrote about Open Blogging, blogging with a DVCS hosted on a community server as backend. Well, I also wrote that I would really love to have something similar for my own site. Somehow the idea stuck and this morning I finally flipped the switch.

The approach I took is probably a bit of a brain-f*ck but hopefully at least a bit interesting to those of you who want to have a blog out of a DVCS like Git :-)

Every time I think about writing a new blog post, I open up the nearest text editor - be it TextMate, VIM, Notepad++ etc. - and start writing in it. But once I’m done I have to copy/paste the whole post into a webinterface, which kind of feels unnatural to me. So pretty much a year ago (I think on day 2 of EuroDjangoCon 2009) I wrote a small API for my blog using piston together with a small CLI client I could use for updating a post.

Well, I used it for a couple of posts and then mostly forgot about it. It simply didn’t offer enough benefit outside of not copy/pasting stuff anymore, and I just went back to writing in Textmate first and then moving the content over.

But for the last couple of weeks I’ve spent a bit of time rewriting the site once again. Visually you won’t notice all that much (hopefully nothing) except for comments now being served by Disqus. But under the hood I basically replaced the whole engine using Git as primary storage for blog posts and pages like the “About” page.

What happens from there is a bit more complicated: When a post is updated in the master-branch, a post-receive hook-script checks what kind of content was changed (post or page) and sends the updated content right into a mongodb which a Django webapps then uses to render the post on the site. 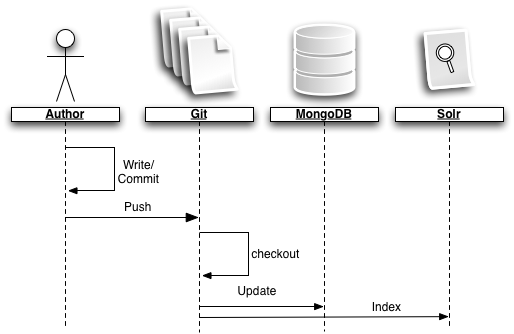 So I didn’t quite leave all thoughts of a database behind but it only acts as secondary storage for presenting the content (in order to get a bit of caching and some simple aggregation facilities that I don’t have to update all the time by hand).

Besides, I was already using MongoDB for my collection-app and rewriting that didn’t feel right to me (except for porting it to mongoengine). I also thought about using CouchDB, but again for because of the pre-existing mongo-integration I abandoned that idea.

As kind of a 3rd layer (or a layer right next to the database) sits a small solr server that I’ve already been using previously for the search feature on this site. Since the excellent django-haystack is now no longere an option, I just went straight with pysolr and had some great fun. Now solr not only acts as the search engine but also provides the related blog posts.

What’s left is the actual post-structure. For this I went with a simple folder-per-post structure and each folder usually only contains 2 files: An index.(html|mdown|rst) file containing the actual post and a metadata.json file that houses metadata like tags, language etc.

This way I can also put file related to each post - like images - right next to the actual content, which makes previewing the whole post offline much easier and also keeps the whole folder-structure rather clean.

First of all, writing all this was great fun but I’ve also again learned a couple of things:

Well, that’s about it. Now I can just hope that I didn’t mess up something somewhere deep in the converter code (not like last night …) ;-)