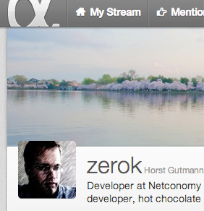 … not permanently, at least not yet, but I’m currently giving Dalton Caldwell’s and Bryan Berg’s still quite new network App.net a spin. After Google+ and Twitter this would be my third social network I’d try to be active on but so far I don’t feel the fatigue and enjoy all of them quite a lot.

ADN and Twitter are quite similar but given their different community and inspiration they just don’t feel alike. ADN still has the fresh smell around it where you basically see every small new feature and actually care while Twitter has access to the whole world.

Regarding the motivation for this experiment (which is a fair assessment since I only got a one-month plan right now): I definitely am on board with the mission of ADN. Over the last couple of months Twitter has more and more moved in a direction I don’t feel comfortable with anymore. Initially their openness via their API to build whatever you wanted around it was what made Twitter great. Now they want to be either a media house or Facebook or both … I just want an un-biased broadcast channel, so basically I want Twitter as it was about 2 years ago ;-)

Don’t get me wrong, Twitter is still great but mostly only because of the people that are on it and naturally this is the hardest part when trying out a new network. Nobody’s there and you don’t make any friends by trying to convince people to join you on yet another website.

Another motivator was definitely just to see what the fuzz was all about :-) @dalton has been on probably any podcast and website that is even remotely related to the web talking about developing a product for its users and not the advertisers, something that I definitely feel at least in the back of my head whenever I visit my Google+ and Twitter profile.

But enough for that verbose justification crap! When it was announced that there was finally some kind of trial account for $5 USD I finally convinced myself that this was something I could spent just for giving it a look after thinking about it for more than month now.

And, as with Google+, you have to make the network interesting by yourself if you want to enjoy it. For instance on Google+ I went looking around for discussions about stuff I was interested in and simply started to participate. Great experience and I intended to do exactly the same on ADN. Worked out pretty well except that here I didn’t really have to look around. It seems like far more people are actually looking at the global stream (probably filtered for some tags) and open up or are open to a conversation than on Twitter :-) Heck, I can’t remember another network where the founders took their time to interact this much with “normal users”.

Given the small target size of the community ADN also hasn’t yet fallen prey to spammers. Probably the whole “pay-wall” also helps here but it just feels nice not get a spam mention whenever you post something.

My current account allows me access until mid-November so there is still enough time to decide if I want to stick with it and/or if it’s worth $36 USD to me to have an account there. But in the meantime: Big thanks to (among others) @nitinkhanna, @idan, @keimlink, @roblen and @dalton for your time :-)