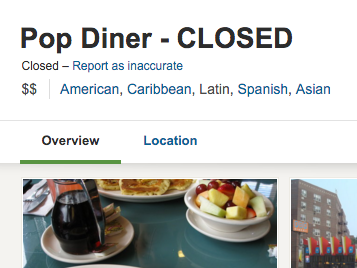 A couple of days ago I had one of those evenings where I was watching a TV show and in parallel started looking up the places I visited while in the city that this episode was taking place in (for the curious among you it was Daredevil and therefore NYC).

It’s only been 4 years but much has changed since then. The hotel I slept in doesn’t exist anymore nor do the Wendy’s next door nor the diner around the corner. Back then I really liked TripAdvisor and wrote a couple of reviews on that trip as well as while being in Florence for EuroPython that year. Now that some of the places I reviewed have closed down, the reviews seem no longer to be there.

Actually, TripAdvisor doesn’t delete the reviews, it just makes them nearly completely inaccessible. Only if you have a direct link to a review you might have a chance to get to a list of other reviews. If the venue was removed from the service (as was the case with the Pan American Hotel in Elmhurst), not even a direct link will help.

TripAdvisor is probably not the only service that just blocks every review that exists for closed locations but it is definitely another reason for me to write even more of these reviews on my own blogs. These posts contain memories of some great evenings that I really don’t want to lose; something I should have known from the very beginning, but somehow forgot.

I’m even considering updating old posts when I find out that a venue has been closed down and/or what became of it. What I’m not sure about yet, is how to deal with old these old reviews. Perhaps I will just create a subsection in my travelogue for them, or do a simple data dump onto Github, or something else entirely. Let’s see 😉