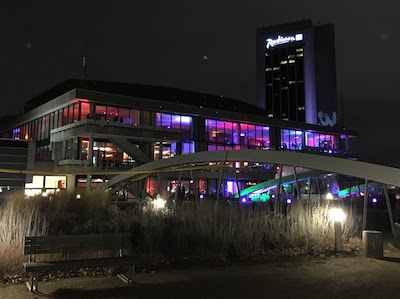 It’s really hard to write about an event like the Chaos Communication Congress simply because it has so many facets. It pretty much boils down to you how awesome an event you make it for yourself. For me it is simply an amazing event with great people and just the best way to end a year!

And that despite me not doing all that much there, and perhaps even being somehow out of place. There’s just so much to look at, so many awesome communities presenting what they’re working on over the year, and let’s not forget the great talks and parties … ok, no parties for me since I’m not really a party-person, but I’ve heard they’re amazing 😊

If you want to get a great overview of what 33C3 was in general, please take a look at this great post by Elliot Williams over on hackaday.com.

Just like last year I wanted to work on a couple of projects. Originally, I had planned to do a bit of styling work on the pyvideo.org website and help Ulrich with moving pyformat.info to Lektor. Instead, I spent most of the first two days adding a search index to this blog using bleve and VueJS. Giving these two a try had been on my list for a really long time, so I don’t feel any shame here 😉

This was probably also the place were I saw most of the talks during Congress thanks to a really stable internet connection (compared to other events) and great work by the VOC (Video Operation Center). That being said, I still haven’t seen that many yet. Something I’ve started to correct the minute I got home on Saturday afternoon.

During the event my personal highlight was probably the “space-night” which consisted of five talks on the third evening in the huge Hall 1. From learning what ESA was working on to getting a quick tour on how large the known universe is, there was something for everyone with even the slightest interest in space exploration. I really can’t wait watching many of the other talks already available for streaming and download.

What makes the Congress every year so special is simply the openess and welcoming atmosphere. You see something exciting? Just walk over to the person next to it and they will give you a tour!

Sure, there are some not so pleasant folks (I’m looking at those of you who critizise people simply because they don’t have GNU Linux as their primary OS), but they are kept in check and balance by the vast, vast, vast, …, majority of nice people there.

During day zero (the day before the Congress actually starts) I also stumbled accidentally through the kids area (which was still under construction) which basically consisted of a whole floor. But don’t get the impression that that’s the only area safe for kids. Except perhaps for some of the party areas I cannot think of any place were children (young and old 😉) weren’t welcome and looked after. While many other events (e.g. in the Python community) try to make it possible for parents to bring their children, Congress has IMHO perfected that.

Sadly, there were also quite a few things that I wanted to do but simply didn’t, for one reason or another:

Well, hopefully, I can get all that off my list next year.

That being said, we found a really nice restaurant near Sternschanze with good beer and I also had korean food for the first time in my life. And it was delicious! Oh, and we managed to take a group picture of everyone from Netconomy attending 😉

All in all it was once again a great event and I’m really looking forward to whatever the CCC plans for next year. A big thank you to all the organisers and angels who helped make this such a great time. Sadly, Congress won’t be in the CCH for the foreseeable future anymore, as that building is being renovated.